The World Is Josh Harris’s Toilet, Especially The Internet Or: Thoughts that are freaking me out after viewing We Live In Public, a new film by Ondi Timoner

September 9, 2009
by Matthew Caron No Comments 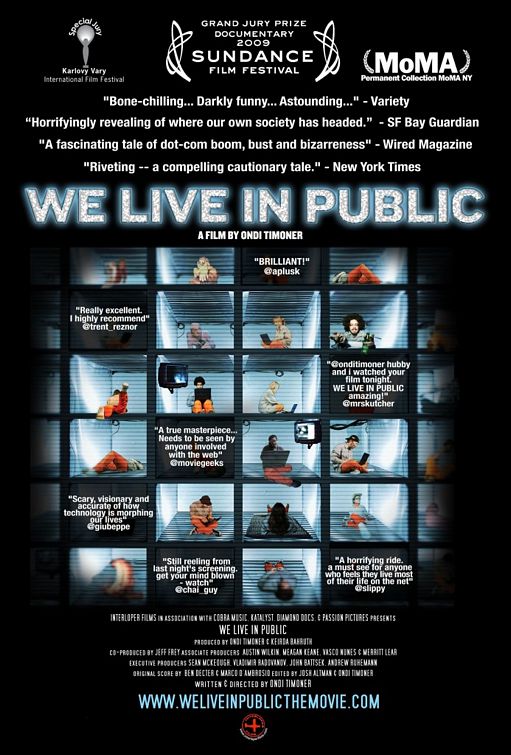 We Live In Public, the new documentary feature by Ondi Timoner, is a downright worrisome piece of work that will have you consider its implications long after you’ve left the theater. Here is the story of dotcom entrepreneur Joshua Harris, a man once worth $80 million who now resides in Ethiopia, safely removed from the American Express people who would very much like to discuss his outstanding credit card balance. Long before his exile in Africa, Harris created software capable of tracking internet traffic and, for the first time, expressing this data in a way that marketing departments could understand. He became very rich. Next, he popularized and streamlined the internet chatroom. He became even wealthier. On a roll and backed by heaps of capital, Josh created a vast and impressive web TV network called Pseudo, effectively firing the opening shot of the now raging war between network TV and the web. Josh sells out at the right moment, and becomes wealthier still.

Now a millionaire many times over, Joshua Harris decides in 1999 that he shall become an artist. Naturally enough, the mediums he selects to work with are technology and live human beings. His vision is an expensive one, and in his own words he “spends money like sand running through the fingers of time” but at the moment money is no object. The goal is nothing less than a living, breathing model of the internet of the near future. In his mind’s eye, the future resembles a 24/7 party with plenty of sex and the very real possibility of mass murder, and it will be recorded to tape from a variety of angles. Harris’s called the project Quiet.

Quiet is placed on public display for the first time in this film, and which I hope will receive further examination now that it has at last been revealed. Quiet was pitched to its participants as a kind of arty party-cum-sociology experiment with the potential to make them famous. Like MTV’s The Real World, the trappings of Quiet bore little resemblance to reality. Rather than a hip townhouse tricked out with the inevitable Jacuzzi, the Quiets took up residence in an underground bunker on Broadway in Lower Manhattan – a cool bunker outfitted in a minimal futurist fashion, but a windowless bunker nonetheless. The Quiet facility could pass for something like a pod hotel, although Harris openly admits that the design had more to do with pictures he’d seen of concentration camps with beds stacked floor to ceiling. Each pod housed a bed, a camera and a television surrounded by three walls opening into a central corridor. The cameras captured everything at all times, and the television offered a channel for every pod as well every hallway, the dining room, the shower and the toilets. The shower was, of course, completely exposed and roomy enough for a half dozen while the unisex toilet area lacked stalls. What would be achieved would go beyond the real world in achieving total coverage of all activity; the Quiets would be putting on a show for each other and gauge their popularity by how many pod tubes were tuned into their activities at any given time. Presto! Here was a fully functional communications network overflowing with user generated content, including but not limited to nude marching bands and toilet cams.

From The Real World Harris borrowed The Confession Room and upgraded it to an interrogation chamber where the Quiets underwent Stasi-like auditing sessions with a professional interrogator. In this bright, white room they would be compelled to account for their failings, secret shames and fears, stripped of their clothing and folded into uncomfortable positions. Here, the principal of total exposure extended into the arena of mind control and intimidation. Installed immediately next door was a firing range stocked with an impressive array of semiautomatic weapons. Total exposure was pushed to yet another extreme with universal access to a considerable amount of firepower. It’s worth noting that the 30 days of Quiet were scheduled to conclude on New Year’s Day of 2000. Harris may have wanted a tech-savvy paramilitary force on his side if the Y2K bug actually fucked up civilization big time.

Harris was himself a participant in Quiet, though he seems to have quiet about his involvement as its author. While his role as dictator was known to a savvy few, it seems that most of the Quiets remained ignorant of his role right up until the final day, and in some cases years later. The mysterious authority behind the cameras and interrogations was apparently referred to as Oz, assuming that the wizard was concealed behind a curtain at a safe distance. However, it might be more accurate to say that Harris resembled Pol Pot, and his vision something like a media geek’s Democratic Kampuchea. Pol Pot, a.k.a. Brother Number One, allowed several years to pass before revealing himself to the participants of his tragic social experiment in developing a classless society. Under his Khmer Rouge regime, all were compelled to toil singlemindedly at rice farming and were relieved from the distractions of family, religion and free time toward this end. Harris twisted this formula around. Not only were the Quiets similarly denied contact with the outside world, they lacked responsibilities of any kind, encouraging them to interact, develop their identities and perform with abandon. People who would not normally fuck, shit, shower or reveal their darkest secrets to strangers suddenly found themselves doing exactly that on a daily basis. And in front of cameras too! Cameras owned by Josh Harris, recording to tapes owned by Josh Harris, to be used for purposes known only to Josh Harris.

And yet, the partygoers trusted that this would all work out to their advantage. Even if they were creating an audiovisual record of their worst and most private moments, it’s not like anyone was bashing in their heads with shovels. Here was a chance at increased fame, all expenses paid. The participants interviewed for We Live In Public all look back on the experiment with fondness. And why not? They are finally in a movie!

The Quiets’ joy at having been subjected to media exploitation and mind-control isn’t so far removed from the enthusiasm for YouTube, Facebook, MySpace, Blogger and so on. The current pod party is a blast, but it remains difficult to know the intentions of the hosts. In an interview filmed prior to Quiet, Harris predicts that the business of selling people their lives back will someday be huge. The practice of profiling users based on their blog entries, emails and Google searches in order to more effectively market products is a perfect example. Down the line, it’s easy to imagine a profitable business designed around the retrieval of lost web content. Conversely, there should be a market in guaranteeing the absolute destruction of this stuff. A great fortune surely awaits the inventor of a web equivalent to the paper shredder.

After Quiet runs its course, Harris makes his most foolish move and decides to experiment on himself and become the star of his own show. He and his girlfriend establish weliveinpublic.com, which broadcasts live over the internet all activity within their apartment, complete with running commentary from subscribers. But that’s not all, folks! No longer content with a simple bathroom cam, Harris installs a camera right inside the toilet bowl. Josh Harris’s ultimate vision of audiovisual communication on a mass scale is that all roads lead to the toilet.

Just as he arrives at the logical conclusion of his artistic odyssey, Josh is confronted with the unpleasant reality of having flushed away his money and professional reputation. The market crashes and countless Silicon Alley dreams spiral the bowl, vanishing for good. The wiz who was once worth $80 million is informed via telephone of his negative checking account balance while sitting on the throne.

As for Pol Pot, he died in a dirt floor hut and was cremated on a pile of tires.