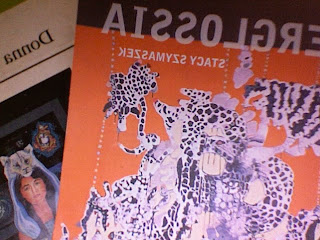 “A cyborg world might be about lived social and bodily realities in which people are not afraid of their joint kinship with animals and machines, not afraid of permanently partial identities and contradictory standpoints.”
– Donna Haraway

Honestly, I haven’t read Haraway’s entire essay. Just the first half. And my memory is such that I don’t remember if she tells us how we do this, the not being afraid of “joint kinship.” Removing the binary can be a scary thing. It means we’re not woman, man, of any particular race, flesh or motherboard. Who leaves home without their cell phone? This all comes with the territory of the modern society, or so it seems. But, what about Eustace? If we wake up in this world, unsure of the world before us, how do we connect?

At least there is “a fake door where intercourse can occur.”

Is this enough? Eustace has also lost hir* language – along with gender, and it seems so many other senses. If we do not know what, or who we are, how are we able to speak? The elusive panther “has taken a/wine bottle to his/shank.” Still no good. Panther comes in, comes out, and we know panther is there, but what does panther want? This head trauma Eustace has suffered somehow seems universal, doesn’t it? I don’t think it is necessarily a modern problem, the idea of a change in perspective. It can be caused by something as simple as a break up, or death. None of us get away without experiencing one of those things. And if Eustace is much like the person repeating the scenario of what went wrong after twenty years, “it’s hard to shutt up/when you have certain information that isn’t clear”, stuttering and babbling hir way through the book, trying to make sense out of a language and history that doesn’t seem to connect. It seems sort of similar to Wittgenstein’s question; how do I know a rhinoceros is not in this room, and how do I prove it? How does Eustace know he is real? And once he figures out if ze is real or not, which of hir do we count on because “Once you have choosen/an occupation/somebody’s done for.” And these problems aren’t really solved by the end, but Eustace does seem content, has found the “kinship”. Maybe that’s why I stopped reading Harway’s essay. The solution seemed to be located somewhere in Stacy Szymaszek’s book Hyperglossia, or maybe it isn’t, maybe Panther got away.

* Since Eustace is genderless (or I seem to think so) I’ve used the genderless pronouns ze (S/he) and hir (her/him).

Hyperglossia was released by Litmus Press over the summer of 2009.