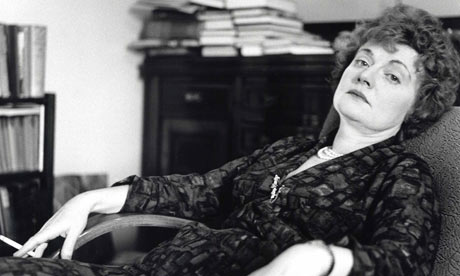 When I was in the midst of my holiday shopping, I picked up a copy of Muriel Spark’s Not to Disturb at Brooklyn’s Greenlight Bookstore. I read (and was floored by) Spark’s Memento Mori earlier in the year; Not to Disturb is a bit less resonant but deeply enjoyable. It’s very Gothic — locked rooms, sinister plots, and multiple references to “him in the attic” — but there’s a Richard Lester-esque briskness at work as well.

In a similarly sinister vein, I finished Barbara Comyns’s The Vet’s Daughter the other night. Between Brian Evenson’s piece on The Rumpus and Emily Gould’s essay on The Awl, I’ve been curious to delve into Comyns’s work; one book in and I’m eager to read more. Without giving too much away, The Vet’s Daughter begins with a sort of grim, off-kilter kitchen-sink realism and moves from there to something stranger. Amidst this, however, the voice of Alice, the book’s narrator, remains utterly clear and refreshingly unpredictable.
Musically, I’ve been making my way through the first batch of music from the Social Music Record Club — ranging from indie rock to gospel to drone improvisations. The seasonally-appropriate Bats/Califone split has been on the proverbial heavy rotation at my apartment lately, and the subtly beautiful songs heard on the  Jamaican gospel compilation Noah Found Grace keep pulling me back for repeat listens.
Nick Curley

My dad and I both got each other copies of Steve Martin’s An Object of Beauty due to a misunderstanding wherein I thought he was hinting that I should get it for him when in fact he was nudge-nudge wink-winking about having gotten it for me. Born Standing Up was pleasant if short on the slander binges and car chases that I look for in memoirs. Martin’s choice to use the real Gagosian and co. by name instead of stand-ins doesn’t make the prospect of tawdry smack talk promising.  He even includes pictures of the paintings he makes reference to, giving the whole magilla a kind of “Welp, here it is” feel.  I swear I usually like my books to be beacons of dignity and civility, but something about this debilitating snow has me craving catfights, shock, and awe.

Also got Patti Smith’s Just Kids (huzzah), Ann Beattie’s The New Yorker Stories (cool and totally out of the blue as I’ve read nothing by her and never would have expected to be given this book) and Keith Richards’ Life (probably fun but likely full of misremembered nonsense and it’s just like, bro, do I really have several many hella hours to devote to this guy’s beef with Springsteen). A leftover gift card will supply the book I wanted most of all but mentioned to no potential gift-givers: David Grann’s bountiful mound of oddity The Devil and Sherlock Holmes, premiering in paperback January 11th.

Tony Judt’s “The Glory of the Rails” in the most recent issue of New York Review of Books is a good read, but I couldn’t help but throw up a soldier salute when I read his bio in the contributors section: “Tony Judt, who died in August, composed the essay on railways in this issue with an eye to a book that he was unable to write.”   Also of little surprise is how much I loved Luc Sante’s piece in the holiday issue.  I’m pretty much convinced Luc Sante, Joan Didion and Greil Marcus need to form some sort of Superfriends sort of group.

Christopher Buckley’s essay “My Year at Sea” in the latest issue of The Atlantic was entertaining.  I think he could have titled it “Things You do When your Will Buckley’s Son,” but I guess this made more sense.

Somebody gave me a galley of Nextbook’s forthcoming book, The Eichmann Trial.  I’ve sort of had it up to here with Holocaust books, but I’m a sucker for this sort of stuff.