“The Process of Being Celebritified”: David Foster Wallace and Lipsky on Award Tour 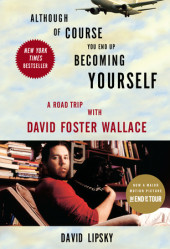 Although Of Course You End Up Being Yourself: A Road Trip With David Foster Wallace
by David Lipsky
320 pp, Broadway Books, paperback, $16.99

David Lipsky calls his latest book a DVD commentary track for Infinite Jest, David Foster Wallace’s very long masterpiece that returned the phrase “magnum opus” to our lexicon.  This is the down and dirty print version of a five day series of interviews Lipsky conducted with Wallace for a Rolling Stone profile.  It was to be the magazine’s first major piece on a fiction writer in ten years, but never saw the light of day (ironically, Lipsky was rerouted to Seattle to cover halfway houses not unlike the one housing much of Infinite Jest‘s action).  At its driest, Although Of Course You End Up Being Yourself does have notes of a moderator prompting an artist to expound.  Yet more often than not, we are treated to a frank conversation that is organic on the page precisely because it candidly details the process of one writer profiling another.

Greater still are those passages when the book kicks into overdrive and becomes a bona fide documentary in the tradition of Don’t Look Back and The Fog of War, or the self-aware collected letters of Woolf or Beckett.  These are uncut affidavits of elusive geniuses that show us their flourish-in-progress.

We are knee-deep in Wallace’s external monologue at arguably the crucial moment in his professional life: the book tour immediately following the release of Jest in 1996.  The ink on its major reviews (tepid reaction from Michiko Kakutani and Will Blythe,  and reverential jubilee from nearly everyone else) had not yet dried.  Wallace’s students at Illinois State University had only begun to recognize his celebrity.  It’s March in the midst of a harsh midwest winter: Wallace has just turned thirty-four (last month, Vol. 1 celebrated in style what would have been his forty-ninth birthday).

Make no mistake, this is the raw feed: three hundred pages of seemingly unabridged transcription that occasionally veers into the mundane (what they ordered at Denny’s).  Lipsky compares the text to uncut film, and hopes that by presenting their dialogue as-is, it will grant Wallace some of the control he feared relinquishing in being the subject of a groomed magazine profile.  At his best Lipsky is a mensch who gets in some fantastic self-digs: “I’d gone on book tour myself a few years earlier.  I traveled seventy blocks and signed store copies.  Then, tour complete, I grabbed a subway home, unpacked, recuperated.”

It would be eerie to write a de facto biography of Wallace, even one covering this moment when everything was going his way, and not address his statements throughout Although in the context of a man who later killed himself.  “Suicide is such a powerful end, it reaches back and scrambles the beginning,” writes Lipsky.  “It has an event gravity: eventually, every memory and impression gets tugged in its direction.”  Moments in which Wallace candidly hopes to enjoy a long career manage to cut deeper than his sporadic, morbid jokes about offing himself.  It is a book that twangs both ends of camaraderie: how it feels to be understood by another person, and the quiver of knowing that person to be utterly gone.

We see the mechanics of an interview that spans five days.  Questions are repeated, asked in different words at different times.  They dance, and we watch Lipsky learn how to lead from a coy master: Wallace progressively peels his own layers to reveal his art and his artiface, and points where his sense of wonder is double-crossed by his suspicion of the increasingly frenzied reader.  It’s remarkable to see how in tune Wallace was with the ways in which the internet and television would create a life du jour accessibility that would hinder our collective willingness towards charity, patience, and sacrifice.

These cultural tidal waves bore the weight of Infinite Jest, but like his colleague Jonathan Franzen, Wallace is quick to identify fiction’s primary function as a kind of remedy or salve for loneliness.  “There’s stuff that really good fiction can do that other forms of art can’t do as well… the big thing seems to be, sort of leapin’ over that wall of self, and portraying inner experience.  And setting up, I think, a kind of intimate conversation between two consciences.”  Lipsky’s achievement in his reexamination of this now fifteen year old repartee is that it often delves into the capability of great fiction: ably crafted characters learning about themselves from one another, perpetually analyzing one another’s placement on the same road.