I will try to keep this from reading like one of those “Walking Talking Working Class” petri dish disasters penned by Peggy Noonan, David Brooks, or Maureen Dowd: three “social animals” who receive disdainful glances from their cleaning ladies, then deem that scorn a flesh-eating bacteria devouring the American Dream. But fair warning: I’m fighting the urge to tell you all about the Great American Dive Bar – a Bushwick basin called The Cobra Club – from which I watched the 139th Kentucky Derby this past Saturday afternoon. To tell of the glorious Great American slurs and epithets shouted at the televised track, and the Great American Frito Pie and muddled green mint juleps being gargled like mouthwash. For two minutes that felt like two seconds, our world of sport was as dirty and savage as it can be, and the crowd went ape. 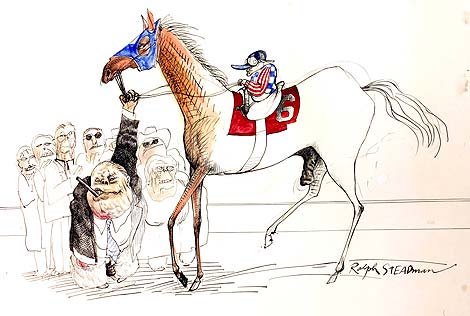 In 1970, Hunter S. Thompson wrote a 7,200 word piece for the short-lived political magazine Scanlan’s Monthly. Legend has it that Thompson, panicked over his inability to write a coherent piece, simply put page numbers on his stream-of-conscious ideas-to-be-fleshed-out-later and mailed them to his editor. “The Kentucky Derby is Decadent and Depraved” became the piece that jettisoned Thompson’s career and launched a thousand ships from the shores of Grantland. It’s a piece so revered by a certain ilk of sports-writer-attempting-novelistic-knowledge (with an acronym’s convenience, let’s call them “the S.W.A.N.K”) that nowadays it is voraciously tweeted, trumpeted, and outright reprinted each May in the leadup to Derby Day. Thanks to the S.W.A.N.K – they who seek the poetics of sport with varied success – “Depraved” is a perennial trotted out each year to remind us of what sardonic journalism can be, complete with a first-person narrator: the reporter as rock star. Call it a Profile in Discourage: akin to Gay Talese’s Esquire masterwork “Frank Sinatra Has a Cold”, but for people who season their bourbon with barbiturates.

Now back to the Great American Dive Bar. You couldn’t have gotten the Cobra Clubbers to hoot and holler hours later at the sight of recently incarcerated Floyd Mayweather, Jr. dismantling yet another sap to bring his professional win-loss record to 44-0, picking at the scab that was Robert Guerrero by the twelfth round’s merciful end. The Great American crowd being nearly all white likely doesn’t help that comparison. The same could be said of the 150,000 plus on hand at Churchill Downs. Seventy years ago, the three most popular sports in America were baseball, boxing, and horse racing. Today, the latter two are antiquity, with the National Pastime looking past due. The brevity of the Derby – the adrenaline and charge – is now its greatest asset. 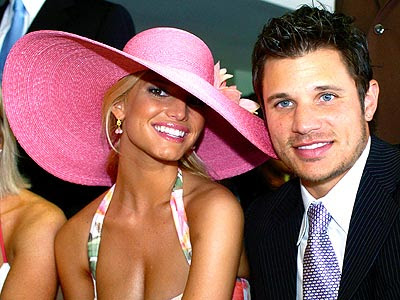 Sitting in the Cobra Club, I was reminded of watching the Derby a few years back and seeing Jessica Simpson and Nick Lachey – still married and dressed to the nines in Spring pastels – relishing the attention of photographers from their luxury box seats. This year the S.W.A.N.K. had Robert Griffin III and Tom Brady – part-owner of this year’s champion – to kick around. But Simpson and Lachey fit perfectly. These two, I remember thinking, were my generation’s Decadent and Depraved. This was new wealth beautifully gussied up to look like old wealth.

Like all great orgasms, it begins with a gunshot and ends with wiping the mud from your goggles. This year’s race had some noteworthy stories. including that of Rosie Napravnik, the first female jockey in the Derby, who finished a solid fifth place aboard a steed named Mylute. Crowd favorite Kevin Krigger – picked to triumph by some who actually know what they’re talking about – would have been the first black jockey to win the Derby since Jimmy Winkfield in 1902. I couldn’t root too hard for Krigger as he was atop Goldencents, a horse faced with the double indignity of being named after a gambling website and being owned by Rick Pitino. None of this year’s horses matched in poetry the handles of many previous Derby champions. I’ll Have Another. Animal Kingdom. Unbridled. Gato del Sol. Genuine Risk. Seattle Slew. Foolish Pleasure. Dust Commander. Lieutenant Gibson. Macbeth II. 1932’s impossibly named Burgoo King. Now those were names that one could proudly cry out in the heat of the night.

Conversations on Thompson often try to hash out to what degree his drugs-and-rock riddled persona was a fabricated exaggeration: Gonzo as gimmick. But today, most of the Scanlan‘s piece sounds au natural. Ralph Steadman, the illustrator whose scratchy line work and approach to human as mutants on parade has become synonymous with Thompson’s prose, had never heard of the Derby or Thompson when assigned to the gig, their harmony the product of a shared urge to skewer all that they observed. Thompson had some rightful contempt for his native Kentucky going in: born and raised in Louisville, he’d suffered in adolescent poverty after the early death of his father, gone to jail in his teenage years as accessory to armed robbery, and left high school without graduating following expulsion and – worse yet – dismissal from the school’s literary magazine.

Revisiting “The Kentucky Derby is Decadent and Depraved” once again, it reads like a highlight reel of the era’s most distilled fears. Thompson off the bat expresses disgust that none of the local papers make mention of the ongoing debacle at Kent State. He pretends to be a photographer from Playboy, knowing the prospect of knowing where the nudes are at will get him better perks than the ones afforded to a muckraker at some liberal rag. Upon being greeted by a press handler named Jimbo, Thompson fakes rumors that the Black Panthers plan to attack members of the crowd at random, inciting vitriol in dim Jimbo, who has previously warned the writer that ordering a margarita in a place like this will make people think him “a faggot”, the preferred libation being whiskey on ice. Truthfully, much of what follows is kind of a mess. It’s unrefined, drags in sections, is probably in need of a better editor, and makes as much of a villain of Thompson as it does the buffoons whom he lampoons.

Yet I am in debt and allegiance to Thompson, as is every bullish writer at Esquire, Vice, and the like. Nine out of ten bloggers is a recently piss-soaked infant starved for attention. Eleven out of ten are caucasian men who can’t drive a car as well as they think they can. In contrast to his questionable successors, Thompson was one of the only self-conscious participatory journalists, yet he still managed to enjoy the party. That is until shooting himself while on the phone with his wife in 2005, but I can’t fairly speculate on what went down there. In his prime, he was a hard worker who could mix the right cocktail of uppers and downers to make his deadlines, and write prose more restrained and precise than that of his pale imitators. Even in his shaky descent, when his love of firearms proved mightier than his pen, he managed to turn out a decent column every Monday for ESPN.com, including some of the more incisive writing to date on the brute mafia politics of the NFL. But like too many of his fellow bloggers, he left behind more abandoned ideas than fulfilled ones, his bibliography littered with unfinished novels which he was apt to denounce as “shit” whenever asked for comment, rejected short stories, and treatments for nonfiction books on everything from strip clubs to the NRA. Late-career appearances on Late Night with David Letterman and then Conan O’Brien remain more satisfying than most of the scribbling he left behind in those waning years.

We all want to write with finesse, as if to prove that we can train as hard as athletes, and prove that journalism is a sweet science of discipline and regimented workouts. It probably is all that, but when the writer is emulating rather than emoting, all you see on the page is the forcing of will onto others, as if the blogger were selling you a car and talking up the “horsepower”. Just as easy as it is to denounce the Derby as decadent and depraved, so too goes our impulses to take “the ride” and fashion a new sleaze from it: the celebrity journalist, that colorful rogue who can consume whiskey like water and still craft a good sub-head. It’s a rosy fantasy that attracts a lot of smart people to write, and leaves just as many casualties in its wake.

Let’s bring it on home. What did we learn here? That decadence and depravity fit as comfortably as gentile modesty. Seersucker makes a sucker of all of us, from Nick Lachey on down. Minutes before the race started, a few of my neighborhood cronies shuffled in and began writing friendly wagers on the back of a discarded Times Real Estate section. I picked Orb, for no other reasons than because I knew he was the likely #2 favorite behind Revolutionary, and because I felt like betting against poetry. “Revolutionary”? The lady doth protest too much. A horse is a horse, no revolution built upon one since Lawrence of Arabia. “Orb” sounded comparatively utilitarian: nondescript and unromantic, the kind of animal into whom one could envision a child’s marble or the whole damn Earth spinning on its own muddy track. “Orb” sounded nicely bulbous. It could be a farmer’s moniker – Orberta on her birth certificate, “Orb” to her friends.

Suddenly I too had a reason to scream and curse among these huddled masses, to shake my julep and pronounce “He loves the slop!” to everyone and no one. (I awoke Sunday morning to smile at the Times‘ simple yet beautiful headline: “Orb Finds Joy in Mudville.”) Being the only one who’d gone with Orb on our Real Estate racing card, I was awarded by the bartender – an amiable NYU grad student in lavender lace plucked from Tudor-era pornography – the draught beer of my choosing. And to think, I’d only come in here to get out of the sun, sip coffee, and drink in my newly purchased Barry Hannah anthology. Suddenly and sadly, it’s over: one hundred and fifty thousand Kentuckians retiring to their solariums. Jessica Simpson boards her jewel-encrusted helicopter, flowered hat crumpled. It’s hard to feel depraved during the two sweet minutes of full-blown decadent rapture, the mid-sport twilight still coming ’round the bend. You don’t feel that sticky illness until the sweaty comedown, when to the crisp soundtrack of Guest Checks torn, the Great American Dive Bar turns quiet again.