Poetry in Motion: Joe Brainard’s “I Remember” If It Was Entirely About Dwayne “The Rock” Johnson

In 1970, painter Joe Brainard crafted a highly unique memoir, beloved on arrival on his native Manhattan and beyond.  It has become a cult classic, praised and imitated by the likes of Paul Auster, Kenneth Koch, and Georges Perec.  Titled I Remember, Brainard’s book was a series of statements about his recalled life, all of which began with the phrase “I remember”.  But what, I remember wondering, might Brainard’s book have looked like if each passage had been about famed actor and professional wrestler Dwayne “The Rock” Johnson?  In commemoration of The Rock’s recent return to wrestling after a ten year hiatus – and  capture of his tenth fake world championship  – perhaps it goes a little a-something a-like a-this.

I remember The Rock’s father, Rocky Johnson.  Johnson was a remarkably powerful wrestler in the late 1970’s and early 80’s.  Not a terrific wrestler with regard to physical prowess, but a sometime “main eventer” with showmanship, who was famed as one of the first African-Americans scripted to win a title belt.  Johnson had a stellar ‘fro, and fast feet which he kicked up rapidly while punching opponents.  His mustache was as robust as they come, and could have served admirably as the hood ornament to any luxury sedan.

I remember The Rock when he first arrived in the World Wrestling Federation under “Rocky Maivia”, taking his father’s first name and ex-wrestler grandfather’s last name, despite The Rock’s pleas with company chairman Vince McMahon to not stick him with the burden of living up to either handle.

I remember McMahon delighting in forcing employees to do things they’d rather not do.  Around the time of The Rock’s arrival in the WWF, McMahon was alleged to have scolded another wrestler with the stage name of Tiger Ali Singh to “shut the fuck up and put on the fucking turban.”

I remember growing embarrassed while watching wrestling with my father whenever something racy or racist would happen on-screen.  I remember blushing. 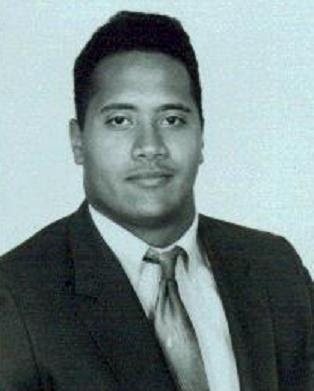 I remember that as Maivia, The Rock was nicknamed “The Blue Chipper”, portraying a saccharine do-gooder.  Fans rejected his mawkish glad-handing, insipid speeches and gelled mushroom haircut.  They chanted “Die, Rocky, Die”.  I remember feeling like a Roman in the Colosseum.

I remember my adolescent rejection of The Blue Chipper’s sincerity.  That I surely remember.

I remember Maivia as one of the last, if not the outright last, of all pro wrestlers to wear flowing plastic tassles around his biceps, as if they were floats in a parade.  A popular trend.

I remember the end of tassles.

I remember The Rock turning on the crowds and becoming a villain, joining an all-black unit of heels known as the Nation of Domination.  As stables go, they were a fairly uninspired attempt at race-baiting audiences, via resentment of tepid attempts at Louis Farrakhan rhetoric.  Upon becoming an outspoken bad guy who lambasted audiences with charismatic arrogance and insults, The Rock became immensely popular, even usurping power of the Nation of Domination from their prior leader, an older wrestler named “Faarooq”.

I remember that years later, Faarooq retired after making a considerable amount of money at the twilight of his career from selling merchandise which sported his beloved late-career catchphrase, “Damn!”

I remember the sound which the arena’s live audience made when Vince McMahon first addressed The Rock as “Dwayne” on live TV.  I remember “Dwayne” was used as a pejorative.  “Ooooh,” went the audience in unison.  “Ooooh.”

I remember the first time I heard wrestling described as “performance art”.

I remember The Rock taking a hiatus of several months from wrestling to shoot his first movie role, portraying the titular Scorpion King in the sequel to Brendan Fraser’s hit film The Mummy.  I remember that I was happy for him.

I remember that everyone and everything in the movie looked extremely beige.  Including The Rock.

I remember steroids, and the tubular gut muscles that followed.

I remember The Rock undergoing cosmetic pectoral surgery in 1999 for reasons that remained vague and rumored for the remainder of his career.

I remember that after his pecs went under the knife, he wore a shirt while wrestling for several subsequent months.  Under Armour type stuff.  Previously unheard of, in-ring shirts became a fashion trend among other wrestlers.  Such was the Rock’s status among his peers.  Or so I remember.

I remember a soap operatic storyline in which The Rock’s cousin, Rikishi Phatu, fueled by jealousy, ran The Rock over with a car.  Rikishi was famed for having an enormous butt, which he displayed in a sumo-style thong loincloth.  His patented in-ring maneuver was to corner an opponent, then rub said exposed butt in his opponent’s face.  “Someone,” I remember thinking, “must be jealous of Rikishi, and his opportunities to do that.”

I remember The Rock raising his eyebrow.  It had impressive curvature.  I remember this became a visual precursor to his popular interview segments.  I remember amazement at how well-regarded one’s eyebrow could be within one’s community.

I remember The Rock hosting some fin de siècle edition of Saturday Night Live, and doing surprisingly well at it.  He even brought other wrestlers on during his monologue.  Such was the momentarily popularity of the World Wrestling Federation in these most triumphant years.

I remember The Rock deciding to sing on-camera more often.

I remember The Rock’s own retirement tour circa 2002-2003, in which he voluntarily scripted himself to lose highly-touted matches to many other wrestlers on the rise, just as he had once been the pretty young thing.  I remember he gracefully lost to almost everyone.