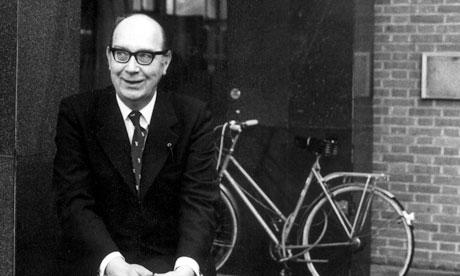 Hey, hey, it’s Philip Larkin’s birthday. The old jerk, he’s my favorite. Not just because he coyly asks “Who is Jorge Luis Borges?” in his Paris Review interview, and not just because he was the inspiration for Lucky Jim, a book I’ve already fawned over on this site. No, I think he’s my favorite because he perfectly captures a Merrie English stereotype of tragic restraint. I’m a sucker for that kind of narrative—I wept at the end of Remains of the Day, like we all did, as we are not monsters. Larkin’s self-harm is pathological; when he directs it outward, it stings, almost respectfully too, as if turning his mind on a subject were a compliment in itself. Maybe I’m just buying into his aura of superiority, but Larkin’s slap feels like a knighting to me.

Come, enjoy this poem about marriage and spring and riding a train.